Provides two 110V outlets and one USB Port for charging cell phones or other electronic devices. 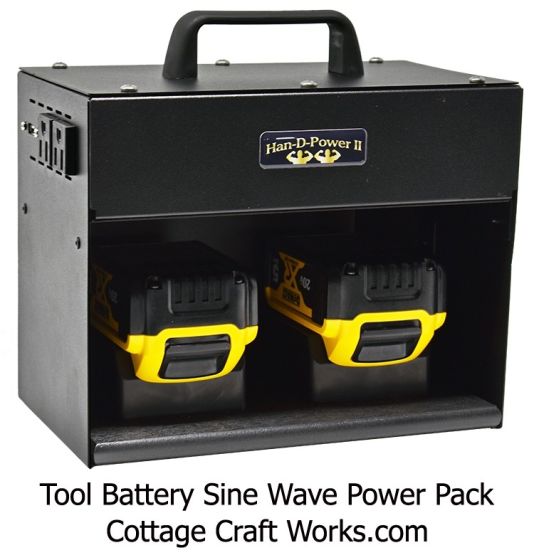 Use computerized sewing machines, computers, other electronics requiring sine wave protection in off-grid environments such as cabins, boats, RVs, and in other remote locations. Han-D-Power II is manufactured for Amish off-grid communities. Refreshingly the innovative Amish build things the old-fashioned way, to last a long time, and to just work as American-made products were once made to do in the early 1900s.

Powerpack batteries are not included, (pictured only for demonstration). Newer 5 AH or higher (Amp Hour) rated batteries are recommended for maximum run times. Amp Hour batteries such as 1.5AH, 3AH, 4AH, 5AH, 6AH, 9AH & 12AH may also be used but run times will be shorter with the lower Amp Hours and slightly higher with the higher Amp Hour batteries. For example, a 3 AH battery would power a product for exactly half using a 6 AH battery. The unit has space for two battery packs, at least one battery pack is required to run the unit.

Available with docking stations for either Makita, Milwaukee 18 volt, or DeWalt 20V battery packs. Select the battery type using the drop-down boxes. Your Hand-D-Power II will then only work with the selected battery pack.