Power your sewing machine and serger off-grid from powerful and reliable power tool battery packs such as used with Makita, Milwaukee, and Dewalt power tools. A lightweight compact unit, no need to lug around a car battery and an inverter.

Hand-D-Sew is a high quality made in the USA power box with a durable compact powder-coated metal cabinet, something you would not expect in today’s plastic component imported environment!

Husbands beware! Your wife is lurking in your workshop and you may be missing your drill battery packs very soon. 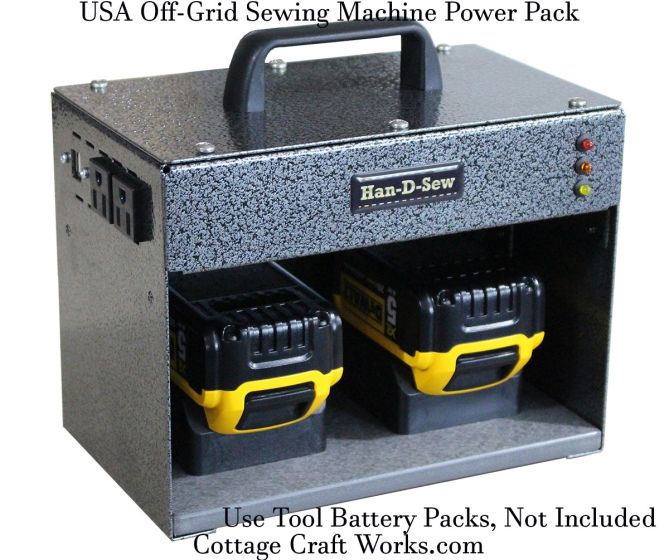 Use electric sewing machines in off-grid environments such as cabins, boats, RVs, and in other remote locations. Han-D-Sew is manufactured for Amish off-grid communities. Refreshingly the innovative Amish build things the old-fashioned way, to last a long time, and to just work as American-made products were once made to do in the early 1900s.

Hand-D-Sew is easy to pack and carry. A perfect companion for your Singer Featherweight sewing machine at quilt shows and off-grid outdoor events.

Powerpack batteries are not included, (pictured only for demonstration). Newer 5 AH or higher (Amp Hour) rated batteries are recommended for maximum run times. Amp Hour batteries such as 1.5AH, 3AH, 4AH, 5AH, 6AH, 9AH & 12AH may also be used but run times will be shorter with the lower Amp Hours and slightly higher with the higher Amp Hour batteries. For example, a 3 AH battery would power a product for exactly half as long as a 6 AH battery. The unit has space for two battery packs, at least one battery pack is required to run the unit.

Available with docking stations for either Makita, Milwaukee 18 volt, or Dewalt 20V battery packs. Select the battery type using the drop-down boxes. Your Hand-D-Sew will then only work with the selected battery pack.

The Amish USA made Hand-D-Sew features: